M. Taylor Darden is a founding partner of the firm, with an active oil and gas based practice. He received his Bachelor of Arts in 1974, and his Juris Doctor in 1977, both from Louisiana State University in Baton Rouge, Louisiana. Mr. Darden is a former member of the Advisory Council for the Louisiana Mineral Law Institute, where he served two terms as its Chairman (1990-92). He also served a two-year term on the Louisiana Law Institute (1991-92) and was later appointed as a member of the Institute’s subcommittee for the revision of the Louisiana Oil Well Lien Act (1992-1995). Over the years, he has been active in the alumni affairs of the LSU Law School, and in 1995 served as President of its alumni association. Mr. Darden practices oil and gas litigation with emphasis on technical and operational disputes among working interest owners. He also handles expropriation litigation, land management and general oil and gas advices concerning mineral leasing, land use and exploitation and royalty collection, indemnity and insurance coverage disputes, general commercial litigation, and the negotiation, preparation and review of joint venture and joint operating agreements, exploration and participation agreements, farm in and farm out agreements, gas balancing agreements, drilling contracts, and gas purchase and sales contracts. In October 2005, Mr. Darden was inducted as a Fellow in the American College of Trial Lawyers. 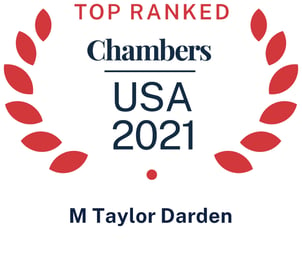 Chevron U.S.A. Inc. v. Aguillard, 496 F. Supp. 1031 (M.D. La. 1980). Successfully obtained declaratory judgment for Chevron that farmoutee was not an indispensable party in action to determining validity of lease as against lessor.

In the Matter of the Complaint of John W. Stone Oil Distributor, L.L.C., Owner of the M/V STONE FUELER, for Exoneration from or Limitation of Liability, No. 98-1828 (E.D. La. 1998).  Represented Chevron Pipeline Company in connection with suit for damages resulting from sinking of tug which struck and ruptured one of Chevron’s crud oil pipelines off the coast of southeast Louisiana.  Case settled for slightly less that $1 million after pre-trial conference with Court.

In the Matter of the Private Arbitration Between BP America Production Company and Westport Resources Corporation Regarding Natural Gas Processing Agreement, 2002. Represented Westport Resources Corporation in three day arbitration of dispute arising under a natural gas processing agreement between the predecessors in interest of Westport and BP.  Arbitration award resulting in relieving Westport of over $6.5 million in future liability.