The Practical, Regulatory, and Legal Hurdles for Businesses Joining the Bitcoin Revolution

Why is Bitcoin Relevant?

Bitcoin is still a fairly new technology, with a lot of uncertainty. However, Bitcoin adoption continues to increase. As the chart from Blockchain.info below shows, the number of transactions on the Bitcoin blockchain is rapidly increasing. 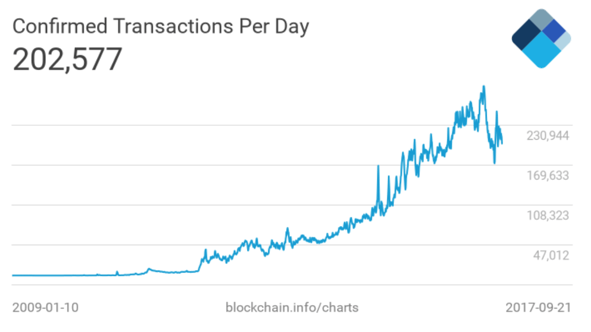 The increase in Bitcoin adoption is happening for several reasons.  First, because Bitcoin cannot be “printed” like traditional currency, many people see Bitcoin as a hedge against hyperinflation. This is driving adoption by investors (and perhaps speculators), and adoption in countries experiencing hyperinflation, such as Venezuela. Second, Bitcoin’s decentralized nature, and its relatively low transaction fees and fast transfer authentication times are driving adoption of Bitcoin as a replacement for international money transfers, allowing both Chinese nationals to transfer wealth overseas and immigrants in first world nations to send money to relatives in less developed countries. Third, consumers are demanding that businesses accept Bitcoin as a form of payment (and many businesses are happy to avoid credit card chargebacks, transaction fees, and delays in receiving payment).  Last, many businesses are forced to deal with using Bitcoin because of “ransomware” computer viruses that lock access to all the files on a computer until a ransom is paid – in Bitcoin. More and more businesses are adopting Bitcoin. However, businesses considering adopting Bitcoin face practical, regulatory, and legal challenges.

Issue #1 – Bitcoin May or May not Actually be Money

Security rights in Bitcoins have the potential to pose problems – both to the lender attempting to secure or recover assets and to the recipient of Bitcoin as payment. But why?

Because Bitcoin is a general intangible, it is possible to perfect a security interest in Bitcoin. However, even with a perfected security interest, a debtor holding secured Bitcoins can easily transfer them away, possibly even outside the law’s ability to permit recovery. Although it can sometimes be possible to determine the owner of a Bitcoin account, it is difficult. And, even if the owner of the account is found, Bitcoin can be transferred to accounts owned by individuals in foreign countries that do not respect United States law.  Last, because Bitcoin can be transferred in amounts as small as one hundredth of a millionth of a Bitcoin and because Bitcoin transactions can happen rapidly, it is easy to commingle Bitcoins to the point of obfuscation.  In fact, programmers have developed programs, called cryptocurrency tumblers, to automatically commingle and redistribute Bitcoin in bulk, for the purpose of avoiding detection. Even if a lender perfects a security interest in Bitcoin, it could be difficult to recover the collateral unless the lender had previously taken possession of the Bitcoin collateral.

However, even though it could be difficult to recover secured Bitcoin from an unscrupulous debtor, a good faith purchaser of Bitcoin could receive Bitcoin subject to a security interest. Therefore, any Bitcoin recipient, particularly those accepting large Bitcoin payments, should check to see whether that Bitcoin has been pledged as collateral for a loan. Because real estate transactions have started to take place in Bitcoin, sellers of real estate should consider either performing appropriate due diligence or taking steps to isolate themselves from receipt of Bitcoin.

I am not a tax attorney, and I provide no advice on tax issues. However, Bitcoin has the possibility to pose special issues with taxation. For example, in 2014, the IRS issued Notice 2014-21, suggesting that “virtual currencies” would be taxed as “property.” However, even because of this Notice, some businesses still find compliance difficult, prompting Congressmen Jared Polis (D - Colorado) and David Schweikert (R - Arizona) to write a letter to IRS Commissioner John Koskinen seeking additional guidance on tax consequences and tax reporting requirements for virtual currencies. Any business considering use or adoption of Bitcoin should consult with its tax attorneys and accountants on compliance issues.

While there is much uncertainty around Bitcoin, Bitcoin is a unique new technology that has the potential to change the way financial transactions take place.

*This article does not necessarily represent the views of non-author attorneys or of Carver Darden's clients. The information presented is for general information and education purposes. No legal advice is intended to be conveyed; readers should consult with legal counsel with respect to any legal advice they require related to the subject matter of the article.